In this exercise we will build a VPC with IPv6 enabled and explore the differences between routing in IPv4 and IPv6.

This is exercise 1.1 for the AWS Advanced Networking Specialty training. For an explanation and overview of all exercises, see the overview post.

Open the AWS Web Console, navigate to the VPC section, and click the Create VPC button.

Fill in the fields and make sure you select “Amazon provided IPv6 CIDR block”. Here you will see the first differences between IPv4 and IPv6:

The limit of choice has to do with the nature of IPv4 vs. IPv6. The IPv4 range is most likely an RFC 1918 range, meaning it consists of private IP addresses that can be used in many private networks. Because these addresses are private, i.e. invisible to the outside world, anyone can use them without risk of address collisions. IPv6 also has a concept of private addresses, called “Unique Local IPv6 Unicast Addresses”, defined in RFC 4193. However, because the amount of addresses available in IPv6 is so massive, in general every device gets its own public IPv6 address, and every AWS subnet gets its own publicly routable /56 range. These subnets are provided from AWS’ own pool of IPv6 addresses, and that’s why you don’t get to freely choose a range.

When the VPC has been created, move to the Subnets tab and click the “Create subnet” button.

On the next screen, fill in some details and select Custom IPv6 in the last field. 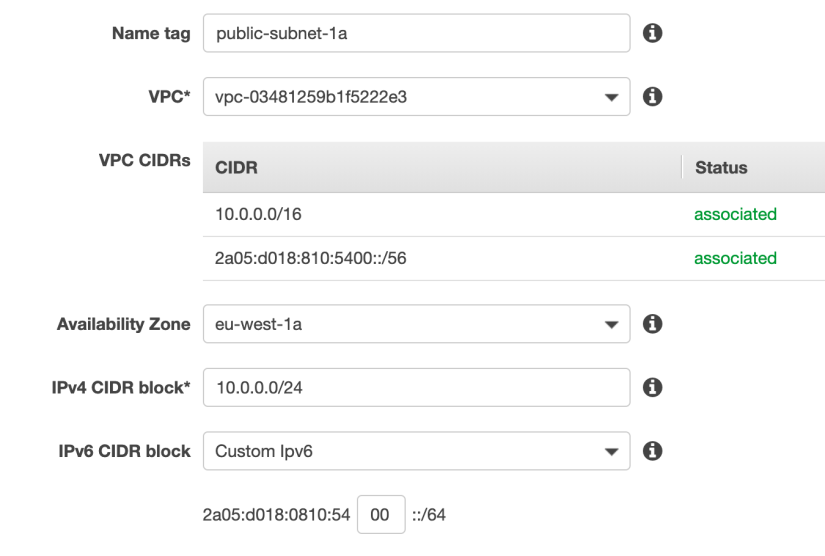 Connecting to the internet

In the previous step we’ve created a public subnet that should be able to connect directly to the internet. However, before a resource in the subnet could actually connect to the outside world, we need an Internet Gateway.

In the VPC console, click the Internet Gateways tab, followed by the “Create internet gateway” button.

Give the IGW a name and click Create. Next, attach it to our VPC.

Then move to the Route Tables tab and add both IPv4 and IPv6 routes to the IGW.

When this is complete, we have achieved the following setup: 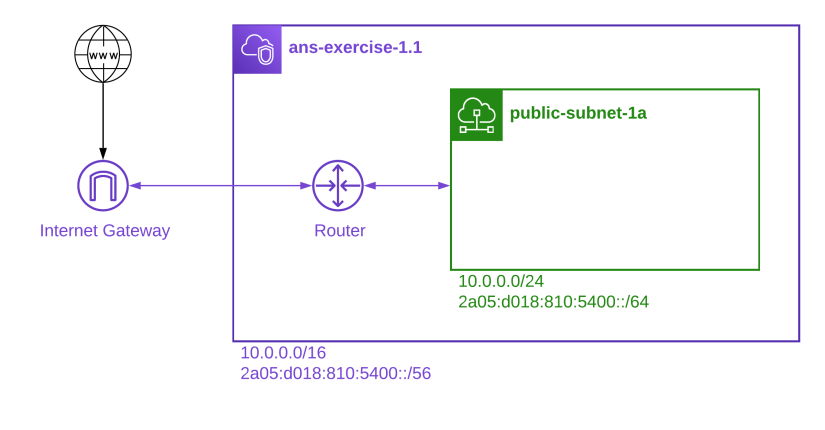 Let’s add an instance to this subnet. Go to the EC2 console and click the “Launch instance” button.

Click next and skip storage and tags (unless you want to change them), then create a new security group that allows port 22 (SSH) for your local IPv4 address.

Review your settings, launch the instance and select an SSH key pair. Then view the instance in the EC2 console, and as expected you will see that it has a public IPv4 address. 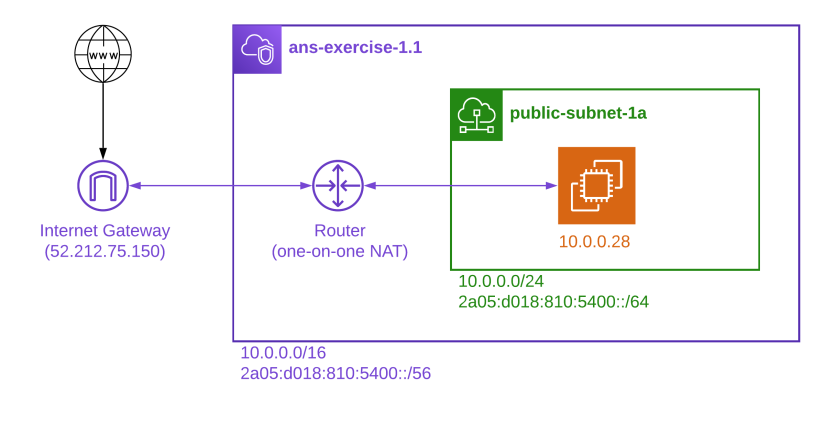 You should open an SSH connection to this instance to verify it works. On the instance, run ip addr, and you should get output like this:

As you can see, there is no mention of the public IPv4 address, which confirms that NAT is taking place. When you’re done, feel free to terminate the instance.

Next up, let’s add an instance that has no public IPv4 address, but instead uses a public IPv6 address.

Create a new instance, but when you get to Step 3: Configure Instance Details, enable “Auto-assign IPv6 IP”.

When you get to the security group, open port 22 to your IPv6 address (or ::0 if you don’t know your address).

Continue to launch the instance with an SSH key pair, as you have before, then verify the instance in the EC2 console. You will see that the instance still has a private IPv4 address (they always do), but now an IPv6 address is displayed as well.

When you run ip addr now, you should get output like this:

As you can see, this does mention the IPv6 address. From this, we can conclude that the public IPv6 address is assigned to the instance itself, and no NAT is taking place. To view that in a diagram:

Leave this instance running for now, we will use it as a bastion in the next section.

In this example, the instance can only be reached by the load balancer, and the instance has no way to initiate a connection to the internet. If the instance needs an internet connection, we need to add a NAT Gateway: 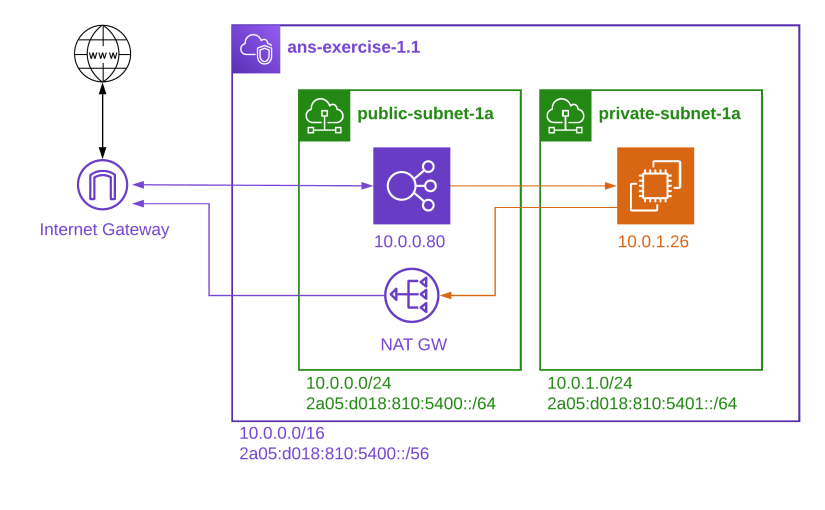 The function of the NAT Gateway is to accept traffic from the private instances and route it to the internet. While doing so, it will apply its own public IP address as the ‘source address’ of the traffic. When a response to an outbound request comes back, it will route the traffic back to the originating instance. As such, from the perspective of the outside internet any traffic (from any amount of instances) routed through the NAT Gateway will seem to originate from a single source; the NAT Gateway’s public address.

But as we’ve learned earlier in this post, all IPv6 addresses are public. So how do we hide our IPv6 servers from the outside world? We’ll discuss that in the next section.

Before we look at how to set up private IPv6 servers, we should mention that currently there aren’t many arguments to implement non-public servers running IPv6. A more common scenario is to set up IPv6 at the frontend (eg. at the load balancers), and do all internal routing on IPv4. Only when you’re looking at an environment where IPv4 is completely unsupported does the scenario below make real sense.

Start by creating a new route table. We will use this route table for private routing. Navigate to the VPC Console and click the Route Tables tab. Then click the “Create route table” button.

Then create a new private subnet. Click the Subnets tab and fill in the following details: 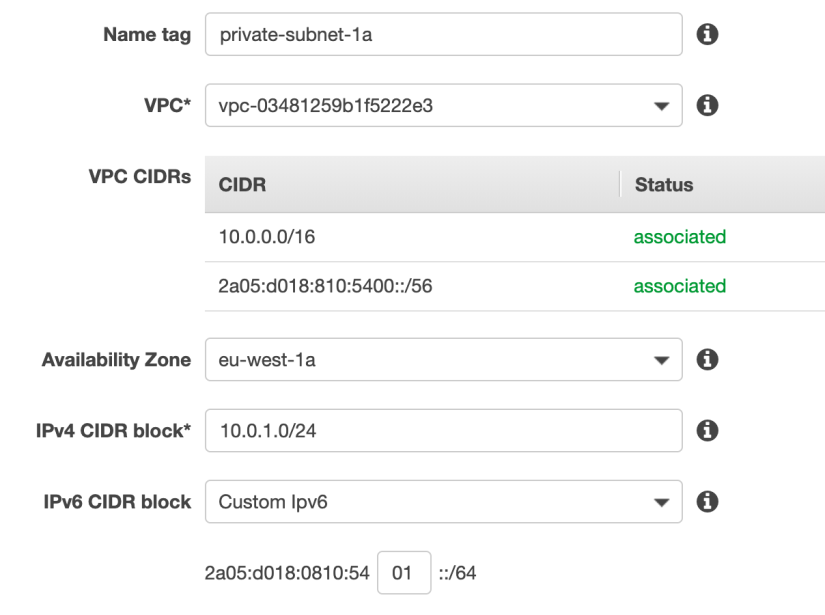 When the subnet has been created, select the subnet and click the “Route Table” tab in the bottom.

When we created the subnet, it automatically associated itself with the default route table. We want to change that into the private route table, so click the “Edit route table association” button and select the route table we created a few steps back.

Select your VPC and click next. Then navigate back to the Route Tables tab, select your private route table and select “Edit routes” from the Actions menu. 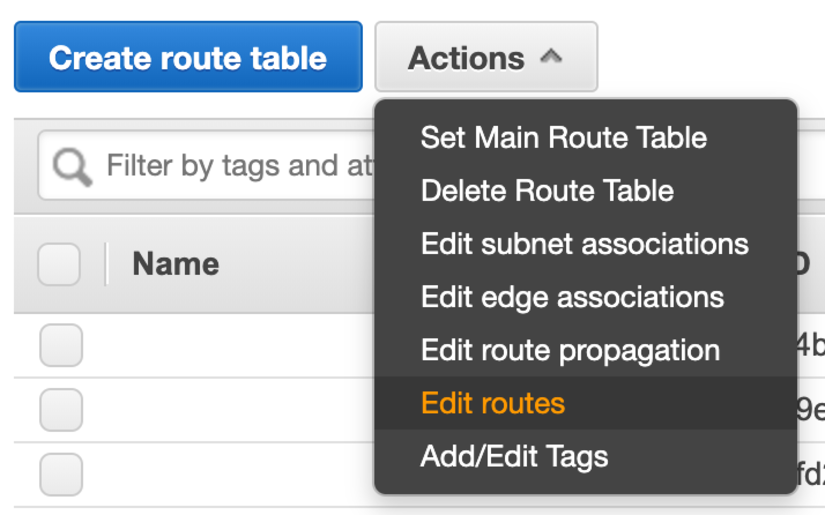 Then add a route for ::/0 to the newly created egress only gateway.

Save the route table. Then let’s add an IPv6 enabled instance to the new subnet. Navigate back to the EC2 console and create a new instance. In Step 3: Configure Instance Details, make sure to select the private subnet and enable IPv6.

When you get to Step 6: Configure Security Group, make sure that you allow SSH access to the world (::/0). We will use this setting to prove that even though the SG is open, the instance is still private.

Continue through the next steps and launch the instance. When the instance has booted, it should show IP addresses like these:

First, let’s try to SSH to the machine directly. Running ssh ec2-user@2a05:d018:810:5401:7bc4:b425:f531:acc4 doesn’t seem to be doing anything, so even though the security group is open, we can’t connect. This is the Egress Only Internet Gateway blocking all inbound traffic.

When the connection is successful, you’re on the private server!

To verify that the server is not able to connect to IPv4 internet, run curl http://ipv4.google.com. This server is only reachable over IPv4 internet.

Next, run curl http://www.google.com -I -v. This server is accessible over both IPv4 and IPv6. The top of the response should look like this:

And somewhere in the middle of the response you should see HTTP/1.1 200 OK, which means the connection was successful.

In this exercise we’ve built a network infrastructure with IPv4 and IPv6. We’ve seen that IPv4 uses a lot of NAT, both on the inbound and the outbound side. IPv6 doesn’t use NAT at all, but you need to use a special construct called an Egress Only Internet Gateway to secure your private servers.