The second week of re:Invent 2020 is done! Another week with more than 50 releases, mainly centered around the topics of machine learning, data analytics and a bit of networking. In this post we’ll review all the announcements and releases, from AWS Audit Manager to VPC Reachability Analyzer.

On Tuesday Swami Sivasubramanian introduced all that’s new in the Machine Learning keynote. Before, during and after the event many new Machine Learning capabilities were announced and released. And that might be an issue. Let me introduce you to the list of releases:

The strength of SageMaker has always been its low-friction introduction to Machine Learning. It allowed engineers without a degree in mathematics to get started with training and hosting models, without immediately boggling them with all the complexities that make ML work. Now that core is still there - but it’s buried under a shroud of additional services with unintuitive names. If you want to train your first model, where do you even start?

Nevertheless SageMaker is still a powerful tool, and with all the new services and features it has become even more so. It now offers a broad feature set for machine learning novices, intermediates and experts.

Another service that saw a few new features is Amazon Kendra. This enterprise search service scans document and data stores like Jira, Dropbox, Google Drive and more. Then it allows users to perform natural language queries, which will return answers from all connected data stores. This enables large enterprises to provide their employees with all the information they need, without expecting them to know all the places they could possibly find it. This is another example of a common machine learning application. Amazon obviously aims to do the heavy lifting, and solve a problem that many of their customers might have.

With new Kendra features like the Google Drive connector and the connector library, more data sources can be connected, making Kendra even more powerful than before.

On Wednesday we saw Rahul Pathak, vice president of analytics at AWS, deliver his leadership session. Around his talk a number of data analytics were released. Again, let’s take a look at the list:

Amazon Redshift is the beating heart of the data analytics category at AWS. Redshift is one of the most used specialty services in AWS, and one of the most used data warehouses in the world. For a long time, Redshift had a quite rigid pricing and scaling structure: you could only select four instance classes, and each of them had a fixed amount of CPU, memory and storage. At re:Invent 2019, AWS introduced the new Redshift RA3 class, which separated compute and memory from storage, allowing you to scale them independently. However, the ra3.4xlarge and ra3.16xlarge classes were pretty expensive, at $3.26 per hour and $13.04 per hour, respectively.

On Thursday Peter DeSantis held his annual Infrastructure Keynote. This has always been my favorite re:Invent event, because DeSantis generally lifts a bit of the covers on what makes AWS infrastructure tick. If you listen carefully you will often hear details you can’t get anywhere else. This year was no different, with insights on power supplies, blast radii, running Mac in AWS, and their custom silicon. 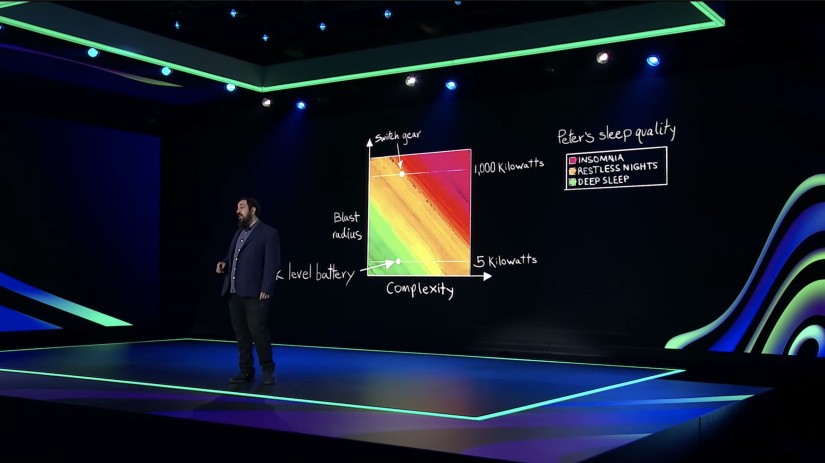 We also saw some new releases, including Custom Routing for Global Accelerator, about which I wrote a separate blog post. VPC Reachability Analyzer is also notable: it allows engineers and developers to troubleshoot network connectivity between two points in one or more VPCs. This eases a pain point familiar to any engineer who has worked with EC2 for even a short amount of time: you’re trying to connect from an EC2 instance to another instance, but it just doesn’t work. You start by checking the security groups, then the NACLs, the route tables, the VPC peering, and so on, to find out where the issue lies. This is time consuming and frustrating. Now you can use VPC Reachability Analyzer to go through this entire process for you, in just a few clicks.

The last announcement that jumped out are the new network performance metrics for EC2 instances. Any EC2 instance has a number of networking limits it cannot exceed. These limits are often more restrictive on cheaper instances. Customers previously had no way of finding out whether an instance breached these limits, except for contacting AWS support. With this release, new metrics are available for inbound and outbound bandwidth, packets-per-second (PPS), connections tracked and PPS to link-local services. This provides more control and insight, and helps engineers prevent issues instead of figuring out what caused them after the fact.

Aside from the topical releases we also saw a number of announcements for other services. There are two I’d like to highlight: ECR cross region replication and AWS Audit Manager. ECR cross region replication is a very welcome addition for everyone using containers in multiple regions. Previously, systems either had to fetch their images from another region, which is both slow and expensive, or developers had to upload their images to multiple regions, which is cumbersome. With this release, images can be pushed to ECR in one region, after which they are automatically forwarded to another region.

Audit Manager is a significant release for all customers who run sensitive workloads on AWS. In an earlier time, security officers prohibited use of public cloud because of perceived security issues in a multi-tenant environment. Nowadays, security officers push for a move to the cloud because of the controls and insights available to them. However, collecting information about your environments and actually proving it is well-architected, secure and compliant is still a difficult task. AWS Audit Manager automates the collection of evidence and makes it available in an easy-to-use portal. Additionally, it provides insights into missing information and any compliance issues it has found.

Week 2 at re:Invent 2020 was more focused around specific topics. The releases were also more iterative than big bangs, but nevertheless we have seen some great additions that clearly show the direction AWS is moving in: machine learning everywhere, hybrid cloud and migrations as a gateway to AWS, and a strong foundation on EC2, optionally based on their custom Graviton2 silicon. There is one more week to go, let’s see what other surprises AWS has to offer!