Many of our customers use VPNs to set up secure connections to their AWS environments. A few common use cases for VPNs are hybrid clouds, remote backups, and federated user management. This article will describe how to test VPN connections without requiring access to the remote end.

Let’s take a pretty straightforward VPN setup, where an on-premise database replicates its contents to an RDS instance: 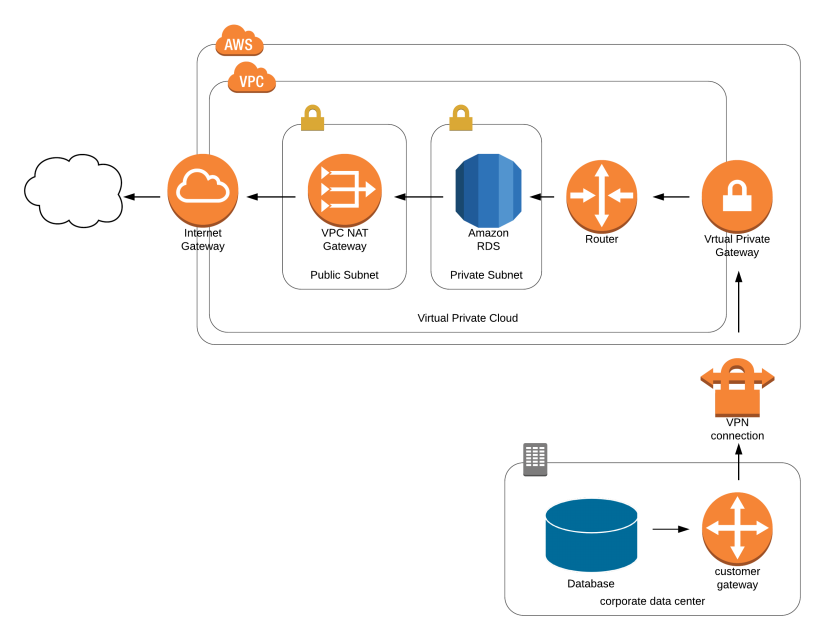 In this scenario, you are responsible for setting up the AWS side, and you’re working with the IT department that manages the corporate data center. The remote engineer indicates that he can’t connect to the RDS instance, but there is no way for you to log in and check their configuration for them. In this case, simulating the connection might help you determine if the problem is located on the AWS side or in their data center.

To simulate their VPN connection, we will setup a new EC2 instance functioning as a Customer Gateway. We will use Openswan to set up a site-to-site VPN connection with the existing VPC VPN. The instance will be placed in a separate VPC to guarantee complete isolation of the other AWS resources. 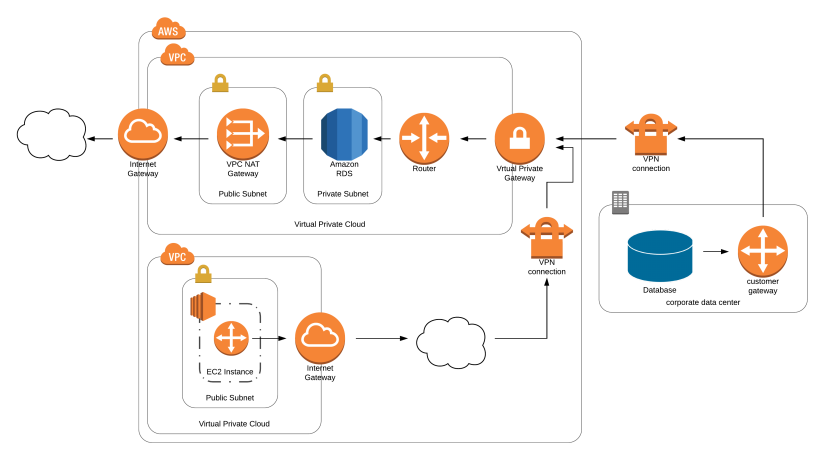 At the start of this tutorial, we assume that you already have an existing VPC with a database in a private subnet, as depicted in the top image. Of course you are free to replace the RDS instance with a Redis Cluster, EC2 instance, or any other resource that is only accessible from within the VPC. A Virtual Private Gateway, Customer Gateway and existing VPN connection can be present, but it is not required.

In the rest of this tutorial, we will refer to the existing VPC as the “RDS VPC”. Next, create a subnet to host our VPN instance. You can give it the same CIDR as your VPC, or a smaller one. Then create an internet gateway. This only requires a name.

The next step is to assign the internet gateway to your VPC.

The last thing required to setup our VPC is to edit the route table and make sure all traffic is routed over the internet gateway.

Create a new EC2 instance running Amazon Linux and place it in the newly created subnet. Make sure it has a public IP address. I used Amazon Linux AMI 2018.03.0 (HVM) running on a t2.micro.

Now that we have an instance that will function as our Customer Gateway, we can configure it in our RDS VPC. Switch back to that VPC and navigate to the “Customer Gateways” section. Click “Create Customer Gateway” and fill in a name and the public IP address of the EC2 instance you have just created.

If you have not done so before, setup a Virtual Private Gateway and attach it to your RDS VPC.

Now navigate to “VPN Connections” section and click “Create VPN Connection”. Select the Virtual Private Gateway and Customer Gateway you have created in the previous steps. For Routing Options, choose “Static” and fill in the CIDR of your other VPC (192.168.0.0/16 in our case). 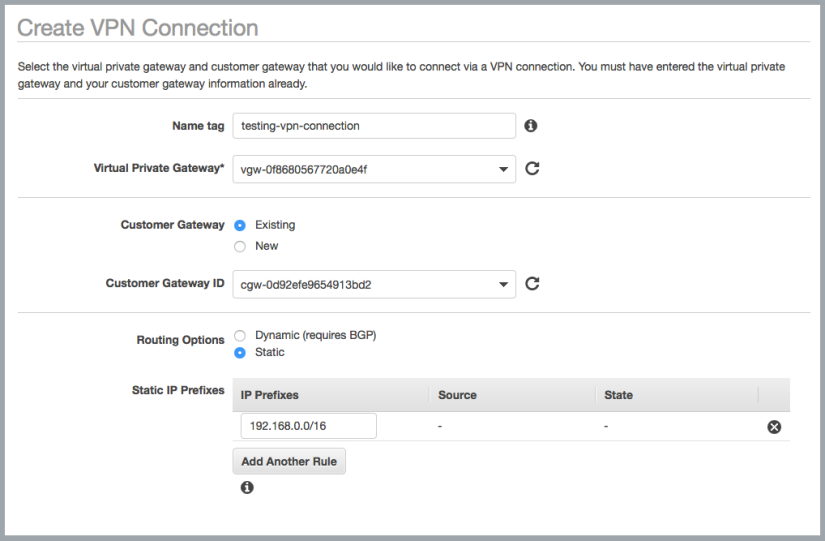 Click “Create VPN Connection”. The last thing to do is to update the route tables and security groups, so that the RDS database knows how to communicate with our new Customer Gateway. Navigate to the route table for the subnet(s) that contain your RDS database and add the following rule. This instructs the router to route any traffic destined for 192.168.0.0/16 over the Virtual Private Gateway. 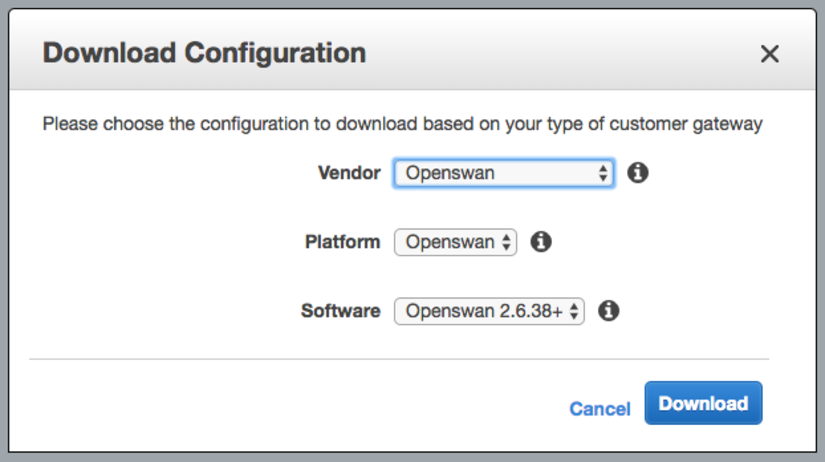 Now open the configuration file you’ve downloaded in the previous chapter and follow its instructions. The first step is to open /etc/sysctl.conf and add a few lines. In my experience, the official instructions are missing two lines, so the content I used is this:

Close the file and apply with sysctl -p. Then open /etc/ipsec.conf and make sure that the line include /etc/ipsec.d/*.conf is not commented out.

Now open /etc/ipsec.d/aws.conf and paste and update the contents as described in the configuration file. In my case that would look like this:

The configuration document also contains instructions for a second tunnel, but we don’t need that, so you can skip it.

Then run a port test, and if all is well you should now be able to connect to the RDS instance!

If for any reason things are not working as they should, check the following things:

Is the tunnel up?

In the RDS VPC, go to “VPN Connections”, select your testing VPN and click the “Tunnels” tab. It should show one tunnel up:

Also double check if the route tables for the subnet containing your private resource (RDS in our case) has a route to the Virtual Private Gateway:

The last common mistake is a security group that does not allow inbound access from the external subnet. So double check that too:

The scenario above might seem silly to you. Why would you setup a VPN connection to check if you’re able to connect to resources in the VPC? It might be a lot easier to just spin up an instance in a public subnet and check from there. Also, verifying that things work from your new VPN will not always help in determining the cause of issues you have with the other VPN.

There are a few good reasons to still setup your own VPN though:

I am sure there are other reasons for using EC2 instances to set up VPN connections I haven’t thought of. I hope this post will help anyone achieve this setup in the future.